The following is excerpted from Notebook, the complete text of which can be found in A Dwelling Place, 49-60

What are a writer's responsibilities and obligations to an inheritance they must by now acknowledge either as a civilising influence or a delusion? Alienation from the levelling tendencies of post-industrial capitalist culture is not the same thing as disillusionment with aesthetic and cultural traditions themselves. Feminist, ethnic, gay and green critiques have been an essential part of an ongoing reassessment of the Western intellectual tradition, but absolute scepticism hardly seems fertile ground for a poet.

Translations — not a soft landing. Bilingual editions at least put a mattress in place.

Two kinds of poetry: the poetry we live, that is unique to each of us, the sex and death that is ours alone, the pain and pleasure we feel, the ideas we think; the poetry we write, the best of which survives each day's detritus, the work that speaks beyond our individuality. That poetry is profound, like our lives, yet eloquent, as our lives can never be.

There is no entrance exam to the school of Proper Poetic Intelligence, but a study of versification, like life drawing classes and a mastery of counterpoint, is a suitable departure point for innovation and rebellion.

Perhaps you can look on Rilke and Celan as an entrance point to and warning sign beyond the black hole of the Holocaust.

Australian: references to flora and fauna, soaps, cricket teams and money-spinning films won't do any longer. Here is a different kind of sensibility that requires new ways of seeing, thinking and feeling.

Stravinsky — one of the most original and gifted composers of the twentieth century. But we still want to listen to Rachmaninov.

Market surveys — pop sociology. If a poll had been taken of the Austrian public as to whether or not Bruckner should have continued to compose symphonies, we know what the result would have been.

Emotion recollected in tranquillity, overt linguistic expressiveness — falling on one side of the language tightrope bruises stanzas and rhythms; falling on the other means hospitalisation in the ward of damaged language.

If Hart Crane and Dylan Thomas had managed to stay afloat, what then?

It is easy, as with van Gogh and Wagner, to satirise the myth of Romantic genius, trying to convince ourselves that we have gone further than them. But no amount of critical fascism will help us make a silk purse out of an over-extended sow's ear.

Some cities trade on their appearance rather than their reality. That can become a cult serviced by artists who prefer appearances to reality.

Tristan und Isolde and 'Love Will Tear Us Apart', Der Zauberberg and Superman, a Rembrandt portrait and the Coca-Cola logo — reaching a new low point when you actually have to state that there is an intentional aesthetic achievement in one that surpasses the other.

Several generations now exist for whom art is what they have grown up with. To hope that discrimination ensues is not elitism, nor a denigration of popular culture, which I enjoy as much as anyone, simply a wish for human fulfilment.

Passion makes mistakes, mistakes leading to beauty that lasts, beauty that can't be paid for. 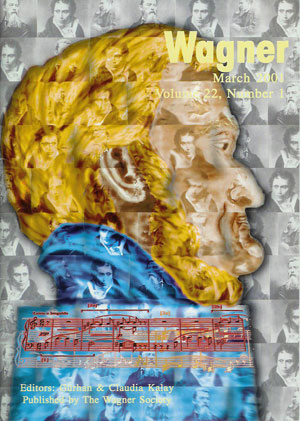 ‘Orpheus Ascending: A Reassessment of Wagner and Wagnerism’

‘This phenomenon of Wagner, so riddled with contradictions that will not fit our preconceived notions of what art and artists should be about, lies like a Venus Fly Trap, waiting to enclose anyone in its suffocating petals who gets too close to it. The singing head continues to sing its lovesong to the world. The lovesong contains our best and our worst, our beauties and our terrors, our loneliness and our giant capacity for love and friendship. We too have drunk the draught of forgetfulness and forgotten our history and duty. Like Wagner, we have abandoned many projects in wounded exile, perhaps to take them up again when our spiritual strength has reconstituted itself.’