For further information concerning the books below email poetnic@yahoo.com

‘We will be the hammerhead shark in the filthy ocean of corruption that comprises our present sorry state.’

Banking executive David Mapleton is working in his Sydney office when he receives a phone call from wealthy business and newspaperman Charles Reynolds. Charles would like Mapleton to join his covert organisation, The Hammer. Reynolds has grown impatient with the failures of the United Nations and other government agencies, and has assembled a group of people who may be able to bring some justice to what he sees as a corrupt body politic. Mapleton has the necessary financial and educational background required by Reynolds, but is he ready for an unknown and dangerous reality that will cause him to re-evaluate himself, his country and his ideals?

The story in this novella is told by David Mapleton, contrasting his deepening involvement in The Hammer’s activities with periods of introspection. Moving between Australia and Europe, Hammerhead also examines the difficulties that come for David and his two companions, Thérèse Sablon and Anton Partl, as they negotiate what Mapleton calls ‘My violent, improbable world.’

With the growing incongruities that culminate above the waters of Sydney Harbour, this tale of fantastical intrigue finds a contemporary parallel for the moral and political uncertainties of the post-9/11 era.

Hammerhead   I Under Surveillance II My Violent, Improbable World III A Traveller Over Antique Lands

I had shot upwards, brilliantly, from the taut bow of youth. But now I was bored with my job.

I’d traded on my Rhodes Scholarship long enough, a sort of not-growing-up, an embarrassment. Thirty-five years had winged through me so quickly. And people said I was too young to have earned my executive position. Talking to others, whether in the office or on Facebook, I no longer believed anything I said.

Here, at the height we bankers deign the correct vista for our imperium, I gazed down at the city. What a melancholy prospect. Crowds shuffled forward, oblivious to the machinations going on above them.

The history of Sydney was an epic of corruption, contained and now tethered, but always ready to break out at the least provocation. Some of my friends spoke to me about ethical investing. I didn’t have the heart to explain to them that every dollar was built on blood. If people knew what had gone on in the Rum Corps days, or why the State Parliament lower chamber was called a bear pit, perhaps they would have had a clearer idea of how we got to where we were. But people usually don’t want to confront the awkward, contrarian facts of the matter. If some glacier was melting a bit more than usual in the Northern Hemisphere, they could go and visit a rainforest in Queensland and get in touch with ecological roots, but political realities left most citizens cynical and thus detached from governmental processes.

Well, I was tired of life, and very tired of myself. My father was ill and my sister’s marriage was in trouble. Her son, my nephew Chris, wasn’t coping. How could I have known what was about to hack its way into my life. The very ordinariness one always takes for granted was going to be sundered. There were no prophetic intimations, no pricking of thumbs.

Just as the rose-violet hour of Sydney’s late afternoon settles through the harbour, over buildings and bridges, the decision to separate, to join, or to die, reaching its limit of longing: this was my moment too, where you might hallucinate what could not possibly be true. In that shadowy place, amongst discarded wishes and fruitless pursuits, when one could imagine the original bush and sandstone, bays and quays emptied of ferries, yachts and cruisers, the pleasure seekers, the indolent swimmers—suddenly, I was up against it all.

A phone call, not a wrong number, at the edge of shimmering water.

‘This is Charles Reynolds here.’

I sat up in my chair. Not that Charles Reynolds. He was one of the wealthiest men in Australia, not to say the world.

Someone was trying me out with a tall story . . . 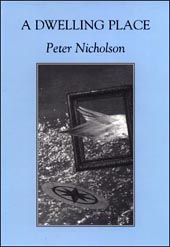 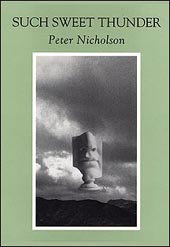 A TEMPORARY GRACE
ISBN 0 908022 08 5 Wellington Lane Press 133 pp Published August 28, 1991 AUD$22.00 Digitized Google Books Pennsylvania State University November 18, 2009
The Canberra Times 29 February, 1992 p. 7 Peter Pierce ‘In general, this is an impressive gathering of two decades work. . . . Under the Southern Cross, Nicholson does some poetic yearning for civilisation, be it here, or in that beckoning outside world.’ 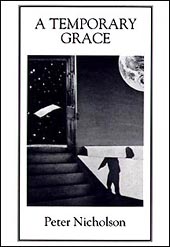