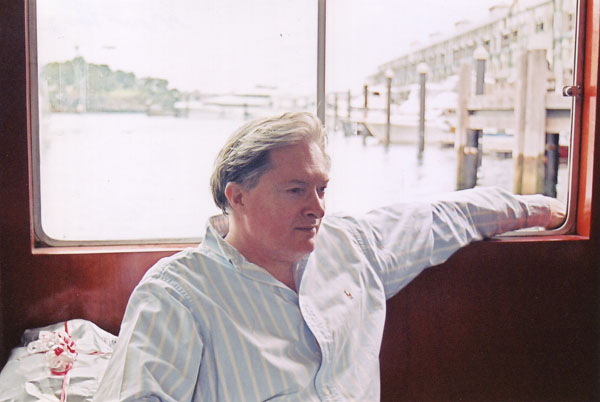 The Australian poet and author Peter Nicholson was born in Waverley, New South Wales, growing up in the Sydney suburbs of Woollahra and Epping. He was educated at Armidale Teachers College and Macquarie University from which he graduated in 1978 with an honours thesis concerning the poetry of Wallace Stevens. Between 2005 and 2008 he wrote a monthly Poetry and Culture column for the blog 3 Quarks Daily.

Works
Nicholson published A Temporary Grace in 1991. It includes the collections At the Water’s Edge and Views To A Bridge. Also included is the short fiction Fast Forward, styled a ‘poetic narrative’ and set in Sydney’s urban milieu. Such Sweet Thunder was published in 1994 and includes Shadow Of A Doubt, Prometheus and S.S. Snakebite.  A third volume, A Dwelling Place, was published in 1997. Speech To A  Mountain and New Affection, New Noise are separated by Notebook, a series of commentaries, opinions and questions about aesthetics. Michael Costigan, former Chair of the Literature Board of the Australia Council, wrote of this book, ‘Nicholson . . . emerges with this collection as a significant and versatile figure in the crowded world of Australian poets born in the decade after World War II.’ 1 The novella Hammerhead was published as a paperback and eBook in 2011. New & Selected Poems was published in 2012 in paperback, eBook and ePub formats. N & SP includes three new collections of verse, Bush Imperial, Up To The Living and A Bit Black together with a selection of poetry from his earlier books.

Themes and Subjects
The poet’s subject matter and prosody extend from an affectionate parody of the bush ballad tradition (‘The Speewah Ballad’) to blank verse explorations of topical subject matter (‘Ascent’), his admiration for European and American culture underpinned by a sceptical Australian temperament . He admires writers such as the Australian poets Francis Webb and Gwen Harwood, and also those artists from the past in whose work he finds a living presence and inspiration—Shakespeare, Bruckner, Emily Dickinson and van Gogh. 2 Not surprisingly, for a writer who has said that he sees himself as a twenty-first century writer with roots in the nineteenth century, the transfigurative Romantic element remains important to him, coexisting beside postmodern revisionism.

Nicholson has written with a knowledge of the Modernists and the transatlantic developments that have followed in their wake.  However, his idiom is not conditioned by critical orthodoxy. His language ranges from the vernacular to the theatrical, as in Condemned At Kangaroo Court, a work that can be acted on the stage or read as a dramatic poem. 3 He has said at his website that he wants his poetry to be ‘feeling that thinks’ about the word and the world and the human factor which links them. His poetry has been criticised for its sometimes apocalyptic tone and avoidance of specific descriptive detail. Seriousness, which does not exclude humour and word play, seems to be a necessary antidote to the ironic mode which he sees as enervating, reducing poetry to the status of a language game. 4 In an interview with the Indian academic Pradeep Trikha he describes himself as an engaged writer who believes that language can express complexity without recourse to ideology: ‘There is a kind of litterateur about these days who needs to be thought politically correct and who implies that he or she is untouched by the impurities, the difficulties, the massive contradictoriness of life. But I like artists who have that divided self and who reflect that in their work. To me, that is the way you get art that the public will eventually get around to reading or listening to or looking at.’ 5

By the mid-nineteen nineties the growing availability of the Internet was set to challenge the status quo. Through his website, activated in March 1998 and archived by the National Library of Australia in 2002, Nicholson acquired a diverse readership, as did other independently-published Australian writers. Previously subject to ‘the tyranny of distance’ (historian Geoffrey Blainey’s phrase), these writers welcomed the availability of a new kind of readership.

Nicholson is not an Australian nationalist, nor does his work duplicate prevailing stylistics. His aesthetic idealism is real, yet it is based on an awareness of contemporary realities, political, scientific and technological. Living in a country of diverse ethnic and social influences, and belonging to a literary culture that has absorbed the old city/bush dualisms, Nicholson writes, as he puts it in ‘Asking Auden’, ‘To summon up fresh energy / For the new century of the race / Called sapiens, whose language grabs / From past and future tense / Continuing words of grace.’ 6

2001 Wagner ‘Orpheus Ascending: A Reassessment of Wagner and Wagnerism’ Wagner Society of the United Kingdom March 2001 Volume 21 No 1 pp. 3–37

2008 Prosopisia Vol I. 2008 Prose and poetry from Indian and other writers eds. Jayanta Mahapatra, Pradeep Trikha To Seek and Find: Poetry and Limitations of the Ironic Mode in the New Millennium Arawalii pp. 44–46

2011 Hammerhead Novella ‘We will be the hammerhead shark in the filthy ocean of corruption that comprises our present sorry state.’ Wollstonecraft Press 167 pp.

2011 PoemCafe ed. Hanyong Jeong Anthology of Korean and other poets in Korean and English, with Peter Nicholson’s ‘Up To The Living’ pp. 182–183

2012 New & Selected Poems Wollstonecraft Press, with selected poems from A Temporary Grace, Such Sweet Thunder and A Dwelling Place together with three new collections, Bush Imperial, Up To The Living and A Bit Black 267 pp.

2017 A Decent Girl: To Read 23 Young Poets Abroad (A Decent Girl title from a poem by Lidja Dimkovska) Translated into Korean and edited by Hanyong Jeong, including poetry by the author DiziBooks eBook pp. 231–242